Shutting Down “Don’t Say Gay”: Speaking Out on School-Community Homophobia and Misogyny 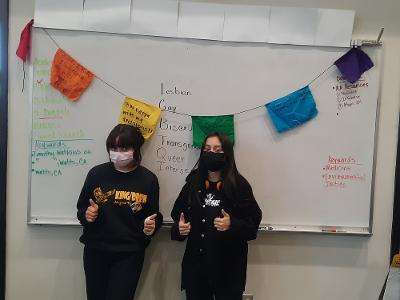 Nationwide, escalating homophobic and transphobic right wing attacks are threatening the mental health and wellness of queer, trans, and gender nonconforming youth. This spring, WLP 9th and 10th graders led presentations on LGBTQI+ school climate, identity, and allyship. Utilizing GLSEN’s (Gay and Lesbian Student Education Network) school climate survey, they focused on the power of pronouns, respecting the authentic gender identities of queer and transgender youth, and advocating for social justice change in their communities. Ninth grader Jasmine Oyeagoro spoke on nonbinary identities, the need for increased consciousness about how there are more than two genders, and why the “they” pronoun is critical. Tenth grader Vanessa Chavarin challenged the widespread use of the slur “that’s go gay” in schools and connected it to high rates of depression and suicide among queer youth. Tenth graders Dafne Embarcadero and Alyson Castro unpacked the differences between gender identity and gender expression, debunking the myth that gender is based on biology and therefore immutable. Dafne also called out the widespread use of the “N” word among non-Black folks as racist, ignorant, and emotionally harmful.

The survey presentations were designed to assess social acceptance, inclusion, and representation of LGBTQI+ students on school campuses.  Students are asked questions about the prevalence of LGBTQI+ affirming curricula at their schools, the existence/accessibility of teacher and administrator allies and the existence of safe spaces like GSAs, as well as incidences of bullying and harassment (across sexuality, gender, race, ethnicity, and ability).

The GLSEN survey presentations reinforced the outreach the youth conducted during sexual assault awareness month and Denim Day in April.  Denim Day is a global commemoration of sexual violence survivors that originated from a high-profile sexual assault case in Italy in the 1990s. Unfortunately, the downsizing of health education in American schools has marginalized sexual violence prevention education, turning it into a piecemeal affair. The youth focused on specific examples of sexual battery, rape, and harassment in dating relationships, friendships, marriages, social media, and school settings. They explored the dangerous impact that victim-shaming, blaming, gaslighting, and silencing have on sexual violence and harassment survivors, especially for girls of color and BIPOC queer youth. Nationwide, African American girls have some of the highest rates of sexual violence and abuse victimization. The youth spoke of the pervasiveness of anti-Black misogyny or misogynoir on campus, in their communities, and in the media. Black girls are often targeted for dress code “violations” and policed for every article of clothing. Overall, Black female victims often struggle to find culturally responsive therapy and counseling resources, leading to depression, suicidal ideation, and repressed trauma that can last for decades. This dynamic was borne out in a 2020 survey WLP students Mariah Perkins and Kim Ortiz conducted with South L.A. sexual harassment and sexual violence survivors. 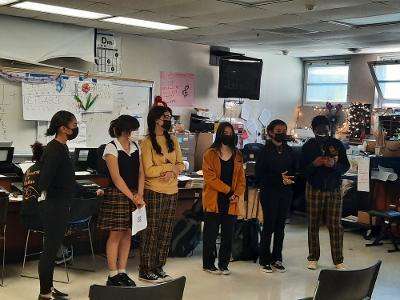 During the discussion, youth also emphasized the intersectional nature of sexual violence victimization and the erasure of male-identified victims. They unpacked the role normalized homophobia and transphobia play in silencing male victims. Mariah Perkins spoke of how the widespread use of slurs like “f—” and “that’s so gay” contribute to a normalized atmosphere of toxic masculinity and harassment of male-identified youth who do not conform to “masculine” norms of behavior, dress, and speech.

During the presentations, male-identified students spoke of the need to intervene in and disrupt harassment and gender-based violence when it occurs among their peer groups. They agreed that boys and men need to speak out on and challenge misogynoir and sexism through peer education. Female-identified also students advocated for developing specific strategies to disrupt the normalization of misogynist language on campus. Many noted that this atmosphere of normalized violence directly affected their sense of self-worth, identity, and mental health. 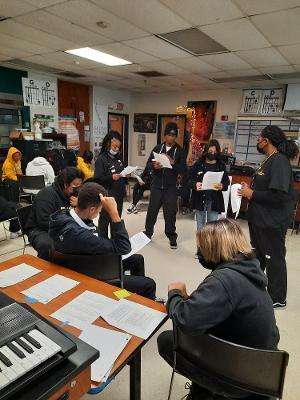 Ultimately, sexual violence, intimate partner violence, domestic violence, homophobia, and transphobia go hand in hand. This is tragically exemplified by the degree to which the epidemic of American gun violence is also an epidemic of toxic masculinity and patriarchy. It has been reported that mass shooters frequently exhibited aggressiveness toward women and have histories of domestic violence. Gen Z feminist activists are calling out these toxic threats and leading the way on redressing normalized harm in school-communities that are often hostile to anti-sexist prevention education.